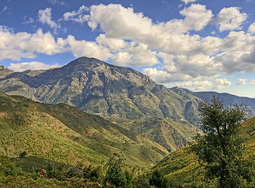 Most people associate Andalusia with sandy beaches, tender sea and modern resort towns. Partly they are right - Andalusia is really a region with highly developed tourism sector. The region is visited by several millions of sun seeking tourists annually. However, Andalusia is a place which attracts people found of rural tourism, who are looking for unity with nature in some remote corner of Spain.

Rural tourism in Andalusia is possible thanks to several nature parks which make up 17 per cent of Andalusian territory. There are two national parks located in Andalusia: Sierra Nevada and Donana (Doñana). Some parts of them are strictly protected, some are allowed for visiting with official guide only, and some are opened for pedestrians and bicyclists only. Landscape and wildlife in Sierra Nevada and Donana parks definitely can’t leave indifferent any eco-tourist.

Due to the placement of Andalusia straight on the bird migration rout Andalusia is often called Birdwatcher’s Paradise. Bird lovers are able to meet in Andalusia rare spices, such as the imperial eagle or the black vulture, and other beautiful birds: the golden oriole, the large white stork, and diverse eagles and griffons.

Another popular kind of active rest available in Andalusia is fishing. The region is washed by the Atlantic Ocean and the Mediterranean Sea, which is an excellent area for salt fishing. This area is a home for such fish spices, as swordfish, tunny, bream, grouper, corvine, leer fish and many others. Fresh water fishing is also very popular in Andalusia. Fishermen from all over the world are attracted to Andalusia for fishing for pike, barbell, trout and black bass that dwell plenty of local dams and rivers.

People thirsty for full unity with nature can join like-minded tourists in registered camp sites or encamp individually in several places where it is allowed. If camping is not your way of rural tourism then be sure that many locals will gladly accommodate you in their cottage or villa for a temperate rent.

Photo is published under the public license: BK59