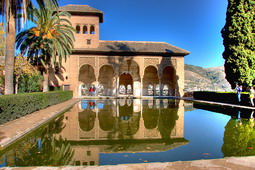 The location of Andalusia in the south of the Iberian Peninsula makes it one of the hottest regions in Europe. Three hundred sunny days a year and eight hundred kilometers of sandy beaches give an excellent opportunity for tourism development. With a population about 6.5 million people it’s the biggest region in Spain. The regions of Andalusia are situated either inland (Cordoba, Granada, Seville, Jaen) or on the coast (Huelva, Cadiz, Malaga, Almeria). The region caters people for diverse kinds of rest of the best quality. The most popular with tourists regions of Andalusia are Costa Tropical, Costa del Sol and Costa de Almeria. 18% of territory is occupied with 80 wildlife preservations and national parks. Exactly in Andalusia there is the southernmost skiing resort in Europe Sierra Nevada that is the only skiing resort in Spain. In this region like anywhere else there are plenty of historical places and landmarks (cathedrals, churches, cloisters, strongholds and castles) many of which were built more then 1000 years ago.

The regions of Andalusia are washed by the Atlantic Ocean in the West and the Mediterranean Sea in the East. Due to that its climate is the warmest in Spain. It’s mild in winter and hot and arid in summer. You can go swimming from the beginning of spring to the end of autumn. The vast influx of tourists is in August (13.25% of all amounts of tourists in a year) as opposed to 5.36% in December. Average annual temperature is about 16-18°C.

Now you should choose the season, pack your suitcases and hit the road…

Photo is published under the public license: Copeau