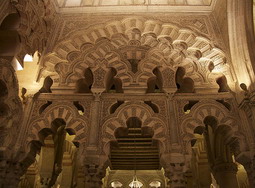 Cordoba province (Cordova) is situated in the north central part of Spain and belonged to Andalusia. It is surrounded by the provinces of Sevilla, Ciudad Real, Badajos, Malaga, Granada and Jaen. Cordoba is a place with remarkable and astonishing history. People of diverse religions and cultures have left plenty of evidences of their presence. A big number of Moorish citadels, baroque churches, convents and monasteries are scattered on the whole territory of Cordoba province. The landscape of the province is exceedingly speckled. Rolling plains around the city of Cordoba and the Guadalquivir basin alternate with forbidding mountain ranges in the West and North.

The province of Cordoba gave birth to many scientists, philosophers and poets, such as the Stoic philosopher Seneca, a major Muslim theologian Ibn Hazm, the Jewish rabbi and philosopher Moses Maimonide, the Renaissance poet Luis de Gongoraand, and many others. In nowadays Cordoba province is Andalusian center of bullfighting and flamenco. The vast majority of the province’s citizens inclined to think that flamenco arose in their native land, but in truth the seeds of flamenco were planted in other provinces Seville, Cadiz and Malaga that are also belonged to Andalusia.
Cordoba province is famous for its magnificent architecture that is mainly located in the capital. The most interesting building is Great Mosque of Cordoba that was built by the Umayyad dynasty of Cordoba and in 7th century was converted to a Roman Catholic cathedral. Cordoba Synagogue (14th century), Fernandine and Alphonsine-style churches (13th century), Alcazar of the Christian Kings (14th century), the Plaza Mayor and many other sights should be of great interest to tourists. Moreover, there are several Roman and Islamic remains. People that are founded of history will be absolutely delighted with a variety of excursions offered in Cordoba.


Photo is published under the public license: erinc salor.