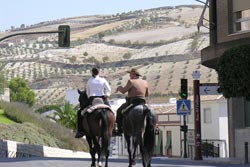 A small town of Baena, which is belonged to the Andalusian province of Cordoba, is situated 60 kilometers to the South-East of the city of Cordoba. Baena is inhabited by about 20,000 people. It is quite advantageous to rent a cottage or villa in Baena and travel to the most exiting cities of Andalusia by car.

Primarily, Baena is famous for its olive oil manufacturing. A plenty of olive presses situated around the town are opened to tourists. You will have a chance of becoming a witness of the olive oil manufacturing. Moreover, you can buy as much the highest-quality oil, as you wish. It is really the best oil of the province in Cordoba and, perhaps, in Andalusia. If you wanted to get acquainted with a history of oil manufacturing closer, you would visit the Archaeological Museum on Calle Henares.

The town was founded in Roman period, although Baena became a quite important town in Moorish ages. During the Moors’ government, there was built a big mosque. In the 16th century, it was rebuilt in magnificent church called the Church of Santa Maria. It is situated in the center of Baena. Not far from the Archeological Museum there is a convent, the Madre de Dios, which was built in 16th century. The convent has a noteworthy choir built in Renaissance style. Besides the Church of Santa Maria, you should pay attention to the Plaza de la Constitucion, which dates back to the 18th century. On the territory of the Plaza you can taste delicious tapas in a mansion that was reconstructed to a tapas bar.


Photo is published under the public license: PhillipC.