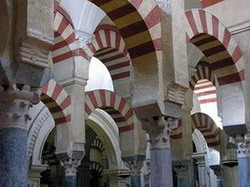 The Great Mosque of Cordoba (Mezquita)

Cordoba, the city of artists, philosophers and scientists, was founded by Romans in 152 BCE. In 10th century Cordoba, with up to 500000 citizens, was the biggest city in the Western Europe or even in the world. In 13th century was won back by Romans. There is no doubt that all this events had influence on the architecture, arts and culture of Cordoba.

The province of Cordoba is one of the hottest in Andalusia. In summer temperature is +40°C so you should prefer spending your vacation here in spring or autumn. The city of Cordoba caters tourists for all tastes in rest and sights. There are lots of squares, gardens, museums, strongholds and castles here. On the Square of Constitution you can find plenty of shops, restaurants and cafés. From the Square of Columbus the widest street in Spain Gran Captain begins. You can visit the main sights of the city such as The Great Mosque of Cordoba (built in 784), Synagogue (14th century), The Walcha Cave (built in 1489) and others. By the way, one of the first corrida arenas appeared in Cordoba in 1779.

Cordoba is famous for its olive oil of the best quality. You can even become the witness of its manufacturing. Also you can enjoy perfect wine and taste many unusual dishes such as stewed bull tail with potatoes.

Visit Cordoba and you’ll make sure that it can offer much more than you can afford for one vacation.

Photo is published under the public license: PhillipC.