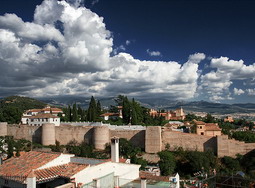 Granada is a province of Andalusia that offers to tourists a number of different kinds of rest. Granada province is characterized by variables in climate and landscape, so there is possibility to go swimming in the sea and to ski in the mountains in one day. The only in Spain and the southernmost in Europe skiing resort Solynieve is situated in Granada province. The ski season usually runs from November to April.

Granada, the western province of Andalusia, is situated in the South of Spain. It is boarded by the Mediterranean Sea and by the provinces of Murcia, Albacete, Jaen, Almeria, Malaga and Cordoba. Granada province shares the Sierra Nevada National Park with Almeria. In this park the second highest after Alps mountain range is situated. Apart from snowboarders and skiers, the park caters tourists for hiking, bird watching and climbing.

At the foot of the Sierra Nevada Mountain is Granada, the capital of Granada province. It is by far one of the most beautiful cities in the world. The Alhambra, an embodiment of the pike of Moorish architecture, is located in this city. It is a fortress complex that was built and decorated in 14th century. However, the Alhambra is not the only interesting sight in the capital. Many other buildings have general appeal, such as the Albacin, the Capilla Real and the adjacent Renaissance Cathedral, as well as plenty of great bars and restaurants.


Photo is published under the public license: Maximo Lopez.