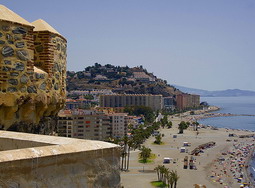 Almunecar is one of two relatively big coastal resort cities in Granada province. The other one is Motril, although it is more industrial than resort city. Both towns are belonged to an area Costa Tropical that is situated in the southern coast of Andalusia. Almunecar is becoming more and more popular with foreign tourists, but the quantity of resting Spaniards is greater, for all that.

There is no doubt that the main attractions of Almunecar are tender sea, perfect beaches and warm climate. There are loads of remarkable hotels for all tastes and bars and restaurants as well. Holidaymakers will be definitely admired with the nature in and near Almunecar. Parque del Majuelo, a botanical garden situated in Granada province close to the town, has outstanding collection of subtropical plants from Cuba and Brazil.

The first settlement on the territory of modern Almunecar was established by Phoenicans in 800 BC and was named as Sexi. Since that time Almunecar has suffered many wars and has changed several owners: Phoenicans at first, then Romans, Visigoths, Moors and, finally, Christians. Off course, every civilization has left indelible imprint at an appearance and culture of Almunecar. Tourists can get acquainted closer with the history of the town in the Archeological Museum and the Historical Museum. The main city’s sights are Almunecar Castle and the San Miguel Castle that both are opened for visitors. Also worth a visit Roman Aqueduct constructed in the 1st century. It is situated a few kilometers inland of Granada province.


Photo is published under the public license: Maximo Lopez (netsella).