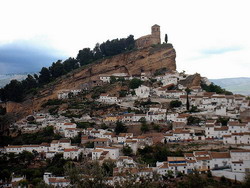 Granada is the capital of the province Granada in the autonomous region of Andalusia. Granada is situated at the foot of the Sierra Nevada Mountains, at an elevation of 738 meters above sea level. The city is the 13th largest in Spain.

Granada is by far one of the most beautiful cities in the world, and it has got a lot of fine names like “The Queen of Cities” or “The True Mahomet’s Paradise”. There are a few legends about why Granada was called in such a way. One legend tells that it was because of the hills on which Granada stands. They have peculiar ordering and look like an opened pomegranate. According to another legend the city streets were narrow and the houses were very close to each other like pomegranate seeds.

Granada is well known for its Moorish and Catholic architectural sights such as the Alhambra, the Generalife, Granada Cathedral, the Charterhouse and many others. The Alhambra, the pearl of Andalusia, is a palace and fortress complex that was built in 14th century towards the end of Muslim rule in Spain. Huge architectural complex includes the alcazaba (citadel), a number of palaces and fortified wall with thirteen towers.

Granada Cathedral, Cathedral of the Incarnation, was built in the age of Renaissance. The design of Granada Cathedral has some interesting singularities – five naves and a circular capilla mayor. The Generalife was the summer place of Nasrid sultans of Granada. In one of the oldest Moorish gardens you can find countless fountains, pavilions, flowerbeds, colonnades and a long pool.

Visit Granada and you will plunge into the atmosphere of the Renaissance with its spirit of poetry and mystery. You will see a lot of magnificent sights, taste delicious food and take part in unforgettable cultural events. Than you’ll find out why Granada is called “The True Mahomet’s Paradise”.

Photo is published under the public license: RaMaOrLi