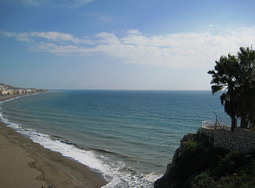 Costa del Sol (that is from Spanish "Sun Coast") is one of the most popular tourist destinations for Andalusia travel. The region spreads along about 150 kilometers of the shore of Malaga province in the South of Spain. Thanks to influence of the Mediterranean Sea the climate of Costa del Sol is mild. Therefore, this sunny Andalusian area attracts people for enjoying sandy beaches and vast variety of outdoor activities, such as playing golf, whole year round.

Costa del Sol is divided into two parts: Eastern and Western. One of the most popular Spanish tourist destinations is Western Costa del Sol. It is highly developed area that stretches for 100 kilometers along the coast between the city of Malaga and Cadiz province. This territory has developed infrastructure and property. Eastern Costa del Sol spreads along 54 kilometers to the East of Malaga city. The most important urban center of this Andalusian area is Nerja. The city is surrounded by numerous tourist pueblos (settlements). The most of Eastern Costa del Sol accommodations are located in Nerja. One of the main city sights is the Nerja Caves, the caverns that stretches for almost 5 kilometers. In one of these caves there is a natural amphitheater where various concerts are regularly held. Besides the beaches and magnetic architecture of Malaga city, Eastern Costa del Sol attracts tourists with annual dance and music festivals and exiting nightlife.


Photo is published under the public license: Cayetano.