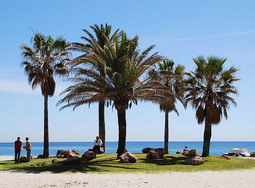 Torremolinos is a satellite town of Malaga, both are belonged to a resort area Costa del Sol in the southern part of Andalusia. Torremolinos is one of the first villages in Malaga province, which have been transformed from a small Andalusian fishing village into a popular tourists destination.

Torremolinos is a very old town. There are several evidences that the first people leaved on the territory of Torremolinos more than 150 thousand years ago. Since those far-off days, the town has changed many owners: Phoenicans, Romans, Moors and Spaniards fought for Torremolinos and neighbouring settlements fiercely. One of the witness of those disquiet times that has been preserved till nowadays is Torre de los Molinos, a defense tower of 12 meters height built by Moors in the 14th century that is situated in the center of Torremolinos.

Located in the center of Costa del Sol, Torremolinos is a model resort town with surprisingly clear sandy beaches and all facilities for rest, such as hotels, bars, restaurants and discos. Those who are planning to spend vacation with family will be pleased to visit the Aquapark, which is one of the biggest in Europe, located near the Palace of Congress. Young people will definitely enjoy the nightlife that is by far the maddest in Malaga province. Older tourists will find Torremolinos attractive because of its closeness to Ronda, Malaga and Marbella. These towns are also located in the southern part of Andalusia and they are certainly worth a visit. In addition, Torremolinos, as all resort cities in the South of Malaga province, has a plenty of perfect golf courses located in and around the town.

It is really an easy task to reach Torremolinos. The town is situated 17 kilometers to the west from the capital of Malaga province, 9 kilometers from Malaga airport that is the biggest international airport in Andalusia.


Photo is published under the public license: gmewes.