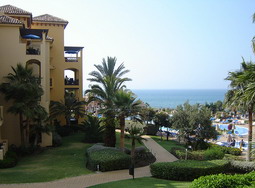 Marbella is a town in the South of Spain which is belonged to a popular Andalusian resort area called Costa del Sol in Malaga province. Approximately half a century ago, Marbella was a small fishermen’s settlement inhabited by less than 1000 people. However, thanks to efforts of Jesus Gil, one of the town mayors, Marbella has been transformed into a luxurious resort city with population about 126,000 people which caters rich people for all kinds of a first-class rest.

Lots of evidences of an ancient human presence could be found in and around the city of Marbella. The oldest remains of human settlements are date back to Paleolithic and Neolithic times. In Roman times, the town had the name Salduba. In Islamic era, Marbella achieved its present name from Muslims, who built a castle surrounded by walls in the town. The ruins of the castle are accessible to tourists in nowadays. Marbella was won back by Spaniards in the end of the 15th century.

Marbella is by far one of the most splendid cities in the southern Andalusian resort area. The town has been extremely popular with the jet set for many decades. There are about 40 golf courses in and around Marbella. You definitely won’t find so many luxurious hotels and restaurants as in this small town in Malaga province. The most famous hotels situated here are Marbella Club Hotel, an ex-residence of Prince Alfonso of Hohenlohe-Langenburg, and Hotel Puente Romano Marbella. Besides hotels and golf courses Marbella has yacht clubs and magnificent beaches washed by the Mediterranean Sea, Playa de la Bajadilla and Playa de Fontanilla. Sport-lovers could find all possible sport activities of the best quality, such as golf, tennis and sailing, in this Andalusian resort.

Spend your vacation in Marbella and you will remember it till the end of your life!

Photo is published under the public license: Matt Phillips.