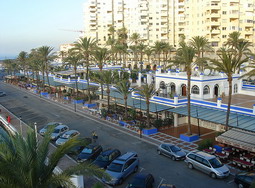 Estepona is a resort town located on the Mediterranean shore of Andalusia 75 kilometers to the Southwest from Malaga city. In spite of belonging to Costa del Sol, the most popular and highly developed resort area in Spain, Estepona have preserved an appearance of a traditional Andalusian town. New hotels blend harmoniously with whitewashed old buildings in Estepona.

Estepona was founded by Phoenicans. As almost all old Andalusian cities, the town has changed its belonging several times and has endured many wars. Several witnesses of this unquiet times are still could be found in Estepona. Among them is the 15th century Clock Tower (Torre del Reloj). Certainly worth a visit are the Casa de la Borrega, the La Virgen de Los Remedios parish church (18th century), The Plaza de las Fores, and the home of the Marquis of Mondejar.

One of the main resort towns on the Southern shore of Andalusia, Estepona, is famous for its endless coastline. It spreads for 20 kilometers and it is divided into 15 beaches. The most popular beach in Estepona is La Rada Beach that is situated in the center of the town. La Rada Beach attracts people for golden sand, sports facilities and beach restaurants. To the East from Estepona there is El Padron Beach, which is also very popular with tourists. El Cristo Beach, which is  located to the West from Estepona, will do for those who are looking for less crowded calm beach. In addition, among the beaches of Estepona there is a nudist beach.

Besides perfect beaches, Andalusia is famous for a plenty of golf courses. The most of them are located near the coastline of Malaga province. There are more than 30 excellent golf courses in less then one hour drive from Estepona. The nearest two of them are Estepona Golf Club and Los Flamingos Golf & Country Club.

Spending your vacation in Estepona, you will have a great chance to visit magnificent cities that are also situated in Malaga province, such as Marbella (33 kilometer to the Northeast from Estepona) and Ronda (65 kilometers to the North).


Photo is published under the public license: __Lolo__.