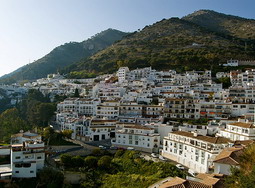 Mijas is a small town in the province of Malaga. It is situated straight in the heart of Costa del Sol between Benalmadena and Fuengirola, which both are extremely popular resort towns located in the South of Andalusia. Mijas consists of two absolutely dissimilar parts: Mijas Pueblo and Mijas Costa.

Mijas Pueblo is a village with about 8,000 inhabitants. It is situated 8 kilometers from a shore of the Mediterranean Sea at the height of 430 meters above sea level. In spite of rapid development of the tourist sector in the province of Malaga, Mijas Pueblo has wonderfully preserved an appearance that is so typical for old villages in the Southern part of Andalusia. Most houses here are whitewashed, the cobbled streets are narrow, and air is fresh and uncontaminated. In addition, there is an old bullring of unusual oval form that was built more than one century ago. Impressive bullfights, so-called corrida, and displays of famous Andalusian horses have taken place on this arena till nowadays.

Many cottages and villas in Mijas Pueblo are owned by Britons, therefore English speaking tourists usually don’t have any problem in communication with local residents. Every Saturday morning at 10.00, the Foreigner's Department of the local council organizes a free of charge excursion for foreign tourists who want to get acquainted with the town closely. Exactly in Mijas people tired after a long walk can take an unusual donkey taxi.

Mijas Costa is much more typical resort town for Costa del Sol. As many settlements on the Mediterranean shore of Andalusia, Mijas Costa has experienced urbanization boom since the middle of the 20th century. A plenty of luxurious hotels, bars, restaurants and clubs has stretched along 12 kilometers of a golden sandy beach. Several perfect golf courses are situated in and around the town. Among them, there is La Cala Resort, the largest golf course in Spain. Mijas Costa is an ideal place for spending vacation in Andalusia, it is very popular with tourists from the UK mostly.


Photo is published under the public license: riverac.