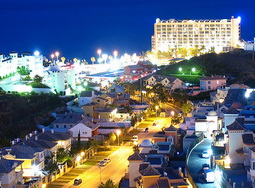 Benalmadena is a popular resort city belonged to Malaga province. It is situated between Fuengirola and Torremolinos just 12 kilometers to the West form Malaga city. Benalmadena has more than 50,000 citizens, although the quantity of residents multiplies up several times in a pike of the tourist season in Andalusia.

Benalmadena has by far the most amazing nightlife in Costa del Sol. A plenty of clubs, bars, discos and restaurants lure tourists every night with loud music and bright outdoor advertisement. The main clubs in Benalmadena, such as Kiu, El Elefante and Mango are situated in the 24-hour Square. Benalmadena Marina is also a place where several perfect discos and clubs could be found. Among them Boals Ice Bar deserves special attention. It is the first bar in the South of Andalusia where entourage is made of ice.

The city of Benalmadena consists of three main areas: Benalmadena Costa, Arroyo La Miel and Benalmadena Pueblo. Arroyo is a business center of the city. Pueblo, so called The Old Village, is an area of Benalmadena which has avoided mass urbanization as the other areas and preserved an appearance of an old Andalusian coastal town.

What is undoubtedly typical for all resort cities of Malaga province, the heart of Benalmadena is situated on and near the coastline, Benalmadena Costa. A plenty of ultramodern hotels and restaurants spreads along the coast of the Mediterranean Sea for several kilometers. Benalmadena Marina has been awarded as “The Best Marina in the World” for many times. It has more than 1,000 moorings that attract owners of yachts from all over the world. On the territory of Benalmadena Marina there are also a terrific Aquarium, a theme park Tivoli World, a Garden of Eagles, and Selwo Marina where a performance of dolphins and penguins is taken place regularly.

Benalmadena like other coastal cities of Costa del Sol is extremely popular with tourists from the UK. Many British families own villas and flats in this wonderful town in the South of Andalusia. A pike of the tourist season traditionally falls on summer months.

Photo is published under the public license: BY-YOUR-âŒ˜.