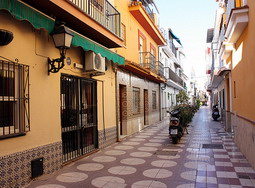 Fuengirola, that is by far one of the most popular tourist’s destinations in Malaga province, is situated on the coast of Andalusia just 20 kilometers to the Southwest form Malaga international airport. Located in the most visited by foreigners Spanish resort area called Costa del Sol, Fuengirola is one of the best examples of an ideal resort city.

In the middle of the 20th century, the village of Fuengirola, as a plenty of resembling fishing villages on the coast of Andalusia, had calm and one-way manner of life. It was inhabited with only 8500 people. However, Fuengirola and neighbouring Torremolinos became pioneers in development of the tourist services sector of Andalusia. In nowadays, Fuengirola is a quite big coastal town witch attracts thousands of travelers from every corner of the globe every year. High buildings of hotels, a plenty of bars, cafes and restaurants, as well as diverse shops, boutiques and malls endow the town of Fuengirola with a modern appearance.

First of all, Fuengirola attracts people for its golden sandy beaches. What could be better than spending vacation on the shore of the Mediterranean Sea in a town where sun shines 320 days a year? Fuengirola has all facilities for rest: excellent weather, the developed services and sports sector, and, off course, a wide range of choice of vacation rentals and hotel apartments for any price. It is well known that the South of Malaga province is a Mecca for golfers. Fuengirola is one of the towns of Costa del Sol that has an innumerable quantity of perfect golf courses.

The main places to visit in Fuengirola are Sohail Castle and the Zoo. The 10th century Arab Castle of Sohail had been in ruins till 1995. It should be mentioned that the town before becoming Fuengirola was called Suel and then Sohail in the past. After restoration and renovation, the Arab Castle is a place where many diverse festivals and open-air concerts have been held. Another town’s attraction, Fuengirola Zoo, was modernized in 2001 - it looks like tropical forest now. The main priorities for Fuengirola Zoo are breeding of endangered species and research of chimpanzees.

Fuengirola is one of the many excellent resorts of Andalusia. Indeed, it is one of the best resorts in the southern Spain. It is a place that is certainly cannot be forgotten after a vacation spent here.


Photo is published under the public license: mupke.