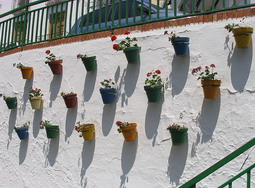 Torrox is a small town on the Mediterranean shore of Andalusia situated less than 50 kilometers to the East from the capital of the province of Malaga and 10 kilometers to the West form Nerja. Torrox has been a favorite resort town for German for a long time. However, the town is becoming more and more popular with British tourists.

Long time ago, when the territory of common Andalusia was settled by Moors, a silk trade between the city of Granada and Near East lay across Torrox. This time is thought to be a rise of the town. A hill, on and around which Torrox is situated, was fortified with a Moorish castle. In nowadays, among the main sights of the town are the Church of Nuestra Senora de la Encarnacion built in the 16th century in Mudejar style; the Convent of the Virgen de las Nieves that also dates back to the 16th century; and some younger buildings, such as the Hospital of San Jose (18th century).

As many resort villages and towns in Costa del Sol, a resort area in the South of Malaga province, Torrox is divided into two parts: Torrox Pueblo and Torrox Costa. Torrox Pueblo is located 4 kilometers form the shore. It has an appearance of an old Moorish village with curve narrow side streets and dazzling whitewashed walls of houses. Torrox Costa stretches for 9 kilometers along the shoreline. It is sown with numerous hotels, bars and restaurants. Perfect services and excellent weather attracts thousands of tourists to Torrox Costa annually.

Among cultural events that take place in Torrox Migas Fiesta deserves special attention. It is held before the Christmas on the nearest Sunday annually. The main activity during the Fiesta is preparing of a dish called Migas that is specialty of Torrox. The preparing is attended by various dance and music performances. Migas Fiesta is traditionally celebrated in a big way. It attracts up to 50,000 participants every year.


Photo is published under the public license: Samu73.