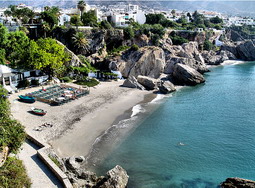 There is no doubt that Nerja is one of the best places to stay during your travel through Andalusia. The town of Nerja is situated in the South of Spain, in an extremely popular with tourists resort area called Costa del Sol belonged to Malaga province. Nerja is not usual resort because it has saved a characteristic appearance of small southern Andalusian town with its two or three-stored white-colored cozy houses. The citizens of Nerja offer plenty of apartments for rent, although there are lots of excellent hotels here.

The territory of Nerja has been inhabited for more than 20,000 years. The evidences of this fact are primitive paintings that were fond in Nerja’s caves in 1959. Since the caves were discovered, they have made Nerja, just a small fishing village in the province of Malaga, one of the most popular tourist destinations in Andalusia. You will be fascinated by a plenty of stalactites and stalagmites inside the Nerja’s caves. Moreover, by far one of the most unusual and spectacular cultural events is held here annually. It is the International Cave Festival, which has been celebrated with many top international entertainers.

Besides the Nerja’s caves, the town is famous for its beaches, which stretch for 16 kilometers. You can lie on the sand and enjoy sunbathing or have an active rest, such as sailing, scuba diving and water-skiing. The small settlement in Malaga province, the town of Nerja, can be a point of departure for your travel through Andalusia. Malaga city is situated 50 kilometers east. Granada city, where Alhambra is situated, is in 1 hour 10 minutes drive of Nerja. Moreover, it will take just half an hour to reach the only ski resort in Andalusia, Sierra Nevada.


Photo is published under the public license: ccgd.