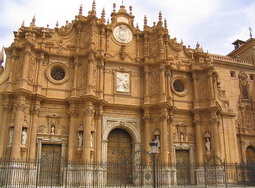 Guadix is one of the most unusual villages in Andalusia. The settlement is belonged to Granada province. Guadix is situated on the left bank of the river Guadix, on the foot of the Sierra Nevada Mountains. The originality of Guadix is mostly in its houses: about fifty percent of inhabitants live underground in so called cave houses. It has been the only method of hiding in sultry summers for centuries.

Traveling through the province of Granada, do not ignore Guadix. It is one of the villages in Andalusia that is really worth to visit. Guadix is a very old settlement. It is surrounded by ancient walls. There was a Moorish fortress here, which was destroyed. However, you will see the ruins of this building. Another famous sight of Guadix is its cathedral founded in the 15th century, which is situated straight in the center of the village. More precisely, it had been a mosque, which was rebuilt into the cathedral between the 16th and 18th centuries.

People of Guadix are very polite and friendly. It is the main feature of every inhabitant of villages in Andalusia. Also the residents of the small village in Granada province are very proud of their unusual houses. So, if you ask them, they will invite you for getting acquainted with their cave houses. You will be probably very surprised when find out that many of this underground houses have quite luxurious and modern appearance inside.

Besides the sights of Guadix, you should definitely visit the impressive castle of the Calahora. It is situated just a few kilometers from Guadix in the neighboring village of La Calahorra. And there is one more place worth to visit. It is the disco inside the cave in the village of Purullena, which is also situated not far from Guadix.


Photo is published under the public license: Samu73.