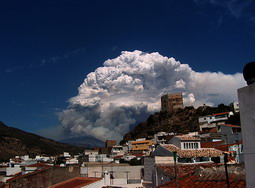 Lanjaron is a small village in the province of Granada. It is situated 49 kilometers to the South of Granada city, one of the most beautiful cities in Andalusia. First of all, Lanjaron is famous for its thermal baths. It is typical spa resort with good hotels, various bars and restaurants. Perfect water that is extracted from subsoil of Lanjaron is supplied throughout Spain and could be found on every table of local restaurants.

Lanjaron is situated in the Sierra Nevada National Park. Therefore, those who are fond of climbing will have a great opportunity to try their strength on the Lanjaron gorge or local outcrops. At one of these outcrops, there are ruins of a Moorish castle. Under a legend, one of Lanjaron’s Moorish rulers threw himself out from the tower of the castle before the Christian army of the Catholic King Fernando defeated his forces.

On the entrance of Lanjaron, there are four old cannons. The small Andalusian village has an old quarter with buildings of Moorish style. Besides the castle, the 16th century parish church is undoubtedly deserves attention. It was built in Mudejar style. This style was spread in Spain from the 11th to the 16th centuries. Mudejar is a mix of Moorish and Gothic or Renaissance styles.

Besides Semana Santa, that is celebrated in a big way in all cities and villages of Andalusia, there are two other festivals that are held in Lanjaron every year: the 20 January, San Sebastian festival, and 23 June, when the main street of the village becomes a battlefield where people shoot each other with water guns.