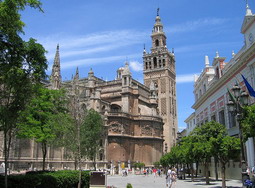 Seville province is in the South of Spain. It is belonged to the autonomous community of Andalusia and situated in its western part. Seville is boarded by the provinces of Cordoba, Huelva, Cadiz, Bajadoz, and Malaga. Seville is the most populated province in Andalusia.

The climate of Seville province is warm oceanic. In the hottest summer days maximum temperature exceeds 40°C. The city of Ecija is well known with the name “The Frying Pan of Andalusia” thanks to its sultry summers. Seville province is set in the center of the mighty Rio Guadalquivir River. Lots of the most important province’s cities are scattered on this fertile lands. The territory is divided up into large parcels interrupted by big towns rather then villages.

Seville province is very popular with tourists, especially its capital that has the same name with the province. The city of Seville is the largest city in Andalusia and its administrative center. It is located behind Madrid and Barcelona on a national level. The city caters people with plenty of architectural sights, such as magnificent Moorish buildings, churches, cloisters, and monuments. The main Seville’s sights are the Catedral de Santa Maria de la Sede, one of the biggest cathedrals in Europe, the palace of the Alcazar, and the Giralda, a minaret that was converted into a bell tower. Seville is also well known for its plenty of tapas cafes and bright nightlife. Tourists also can take part in a spectacular cultural event, Semana Santa festival, that is celebrated in the city in a big way whole week before Easter.

Photo is published under the public license: leoplus.