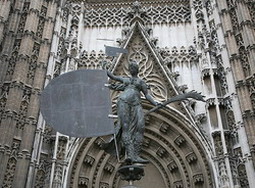 The Cathedral of Seville

Seville is a city in the South of Spain. It is the capital of Andalusia. The city is the cultural, artistic and financial center of the region. One legend tells that Seville was founded by Greek hero Heracles, but in truth it was established by Romans and had the name Hispalis at first.

Great number of towers impart to Seville inimitable look. The main city sight is the Cathedral of Seville (Catedral de Santa Maria de la Sede) that reused some elements from the mosque. The Cathedral of Seville is topped with a statue El Giraldillo, representing Faith. Lots of other sights deserve your attention: the military watchtower Torre del Oro, the Town Hall that was built in 16th century, Seville University, the Plaza de Espana. In Seville you will see lots of fountains. They are partly supplied with water by ancient aqueduct that was built by Romans.

The capital of Andalusia is one of the warmest cities in Spain. The annual average temperature in Seville is 18.7°C. The city is well known for its festival Semana Santa that is celebrated whole week before Easter. On this festival you will see lots of women in impressive dresses and men in their best suits dancing flamenco. You can also visit corrida that take place in the second biggest arena in Spain.

In Seville you will taste all kinds of traditional Spanish food of the best quality: gazpacho, grilled and fried seafood, grilled meats in sauces and chickpeas, polvorones and mantecados (traditional Christmas cakes), and many others.

Visit Seville and you will get acquainted with Spain from every quarter!

Photo is published under the public license: Sputnic Mania.