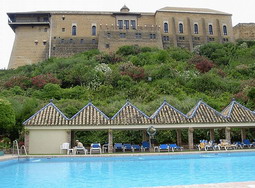 Carmona is an old picturesque town located in Seville province about 40 kilometers from the capital of Andalusia, the city of Seville. Carmona is a town with unique atmosphere of antiquity that especially could be felt in “the Old Town” where one of the main town’s sights, the citadel of Carmona, is situated.

The first people settled on the territory of today's Carmona thousands years ago that is proved by evidences found in the natural caves near the town. In the Roman period, Carmona had big importance. The history of the town has been closely related with the history of neighbouring Seville. The town was one of the eleven main strongholds of the Rome Empire in its farthest North. It had fortress, which was surrounded by walls when the town was occupied by Moors. However, like all villages and cities of Andalusia, Carmona was won back by Spaniards lately.

What is really remarkable that many historical buildings of Carmona have been remained till nowadays. The main entrance to the town is gate built by Moors. The second thing that tourists see when enter Carmona is its tower of 15th century, a replica of Seville’s tower Giralda. Spending holidays in Carmona, you should certainly visit large Roman necropolis that was discovered in the end of 19th century. There is an amphitheatre and almost one thousand ancient tombs, some of which date back to the 2nd century BC. One more place worth to visit is Parador, the restored fortress of Pedro of Castile that was ruined after strong earthquake in the beginning of the 16th century. Actually, the citadel of Carmona, Parador, is a luxurious hotel in nowadays. In addition, there are many beautiful churches built in Mudejar and Renaissance styles in Carmona.

Besides astounding architecture and inimitable atmosphere of old times, Carmona caters tourists for attractive prices for the hotel apartments in comparison with neighbouring Seville. Being accommodated in Carmona you can get to the capital of Andalusia for only 30 minutes.


Photo is published under the public license: TeamGeist.