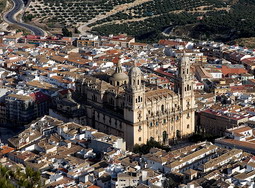 Jaen province is well known for its wide areas of olive trees. Thanks to that in a definitive term of every year a landscape of Jaen province stains in a deep orange color like anywhere in Andalusia. Jaen is the tenth largest producer of olives and olive oil in the world. During the first week of October the world biggest trade fare devoted to Mediterranean crop is taken place in Jaen, the capital of the province. By the way, this Andalusian city is inhabited by about one sixth of the province’s population.

The landscape of Jaen province is spacious and unspoilt. A big number of astounding Renaissance buildings is located here. You will be acquainted with a rich province’s history at the time of your visiting of old churches, exuberant palaces and majestic cathedrals among which are Jaen Cathedral, Saint Catalina's Castle, Santa Maria Cathedral and many other impressive sights. The villages and towns worth visiting are Ubeda and Baeza that have been lately declared Heritage of Humanity by the UNESCO. There are 4 national parks located in Jaen province. One of them is the Sierras de Cazorla nature park that lays just east Ubeda and Beaza. It is by far one of the most beautiful parks in Andalusia.

Jaen is a region with emerging tourist services sector. Many travelers enter Andalusia through this it. And the vast majority of them are completely satisfied with the quality of serves in Jaen province.


Photo is published under the public license: afloresm.