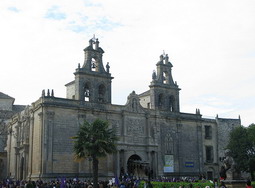 Ubeda is a picturesque Andalusian town situated in the center of Jaen province. It has world fame thanks to its amazing architecture of Renaissance style. Due to a plenty of well-preserved buildings of the 16th century, Ubeda and neighbouring Baeza have been in the World Heritage Sites list made by UNESCO since 2003.

The history of Ubeda is closely related with the history of Baeza, which is situated just 16 kilometers to the West. Flowering of Ubeda fell on the 16th century. Thanks to a textile manufacturing, the town had become very rich that gave powerful incentive to development of architecture. The Spanish city of Ubeda received an inimitable appearance of an Italian town of Renaissance period thanks to Andres de Vandelvira, a famous architect that was hired by Ubeda’s noblemen.

The most interesting place in Ubeda is its square called the Plaza de Vazquez de Molina where lots of impressive buildings are situated. Among them there is the Palacio de las Cadenas that is also called the Chains’ Palace due to the decorative chains, which decorated the facade of the building once. In the Plaza de Vazquez de Molina also situated Saint Mary of the Royals Alcazars church (it is of mixed baroque, gothic and renaissance styles), Dean Ortega Palace (a luxurious Parador hotel in nowadays), and Sacred Chapel of El Salvador (with startling stone facade, by far one of the most beautiful in Andalusia).

The Ubeda is a place where an important cultural event, The “City of Ubeda” International Festival of Music and Dance, takes place. It starts in May and includes a plenty of concerts that are held around the historic center of the town. Among the concerts, there are the Children's Festival, the Chamber Music Season and the Music Fair. Visiting an island of Italian Renaissance situated straight in the center of Jaen province, the town of Ubeda, during the Festival, you will have a great opportunity to enjoy open-air jazz, flamenco, opera, symphony orchestra and chamber music.

Photo is published under the public license: jmerelo.