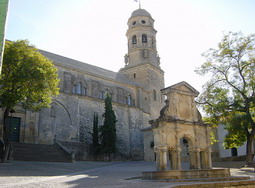 A small town in the province of Jaen, Baeza, is thought to be one of the best examples of Italian Renaissance architecture in Andalusia and even in whole Spain. Baeza together with a neighbouring town of Ubeda were added by UNESCO to the World Heritage Sites list in 2003.

Baeza was founded by Romans and had a name Beatia at first. In the Middle Ages, when the territory of modern Andalusia was under Moorish control, Baeza was a big prosperous town with up to 50 thousand inhabitants. The arch of Baeza and two town gates to Ubeda and Cordoba have remained from the Moorish period of the town’s history.

Baeza was won back by Spaniards in the first half of the13th century. Due to a production of textiles, the town had become flourishing and rich since 3 centuries. A transformation of Baeza began when its nobles hired several architects among who was Andres de Vandelvira, a famous specialist in Italian Renaissance. Thanks to Andres de Vandelvira, Baeza acquired absolutely non-typical for Spanish cities appearance of an Italian town.

All sights of Baeza are located very close to each other in so-called Zona Monumental. The main town’s Renaissance building is the university that was built in 1538. It is used in the capacity of a summer school for the University of Granada in nowadays. Another remarkable building is the exquisite Catedral de Santa Maria, which was built on the basis of a Moorish mosque. Walking in Zona Monumental of Baeza you will see many other impressive buildings, such as the Palacio de Jabalquinto, the San Pablo Church and Plaza Porticada del Mercado Viejo. All this magnificent examples of Italian Renaissance architecture cannot leave indifferent any guest of Baeza.

Baeza is located 50 kilometers to the Northeast from Jaen, the capital of the province of Jaen. The nearest international airports are situated in Granada (about 130 kilometers) and Malaga (240 kilometers), which are also belonged to Andalusia. There are railway and bus stations in Baeza.


Photo is published under the public license: Allie_Caulfield.