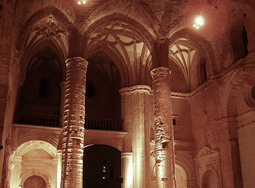 Alcala La Real is a small town in Andalusia that is situated between Granada and Cordoba. Alcala is belonged to the province of Jaen. The town is forty minutes from Granada city and one hour and half from the Mediterranean shore. Alcala La Real has the population about 23 thousand people.

Alcala La Real is a town with a rich history. It was a witness for many battles that frequently happened between Christians and Moors in medieval times. In 1341, Alfonso XI captured Alcala and started the building of abbey, where the crown headquartered for farther offences on Moors. Turning back to 7th century it is important to mention that the main Alcala’s sight, La Mota Castle, was built by Moors in 727. The magnificent castle, that is undoubtedly should be visited during your travel over the province of Jaen, was a strategic fortress. La Mota Castle was seriously damaged in 19th century in times of war with France. However, three rows of fortifications are remained. You can also visit a museum located on the territory of La Mota Castle.

The province of Jaen is a region with emerging tourist services sector. It is caused largely by Alcala La Real. Besides La Mota Castle, there are lots of sights in this small Andalusian town that are worth to visit. The Abbey Church, which was built in both Gothic and Renaissance styles, will impress you for its 42 meter tower. St Juan Church is also very popular with tourists. You should surely pay attention to the Town Hall, which is located in El Llanillo district of Alcala La Real.

Planning a trip over the Andalusian province of Jaen, do not forget about Alcala La Real. Don’t miss an opportunity of getting acquainted with this small fascinating town.


Photo is published under the public license: rucativava.