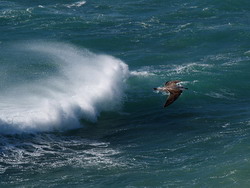 Cadiz province is the southernmost region of Spain and continental Western Europe. It is situated in the southwestern part of Andalusia. Cadiz is boarded by the Andalusian provinces Malaga, Huelva and Seville, as well as the Mediterranean Sea and the Atlantic Ocean. The capital is the city of Cadiz. There are six tourist's areas in the province: Bay of Cadiz, Countryside of Gibraltar, Countryside of Jerez, La Janda, Lower Guadalquivir, and Sierra de Cadiz.

Cadiz province is famous for its relatively wild beaches many of which are quite far from urban areas. The province has the highest number of Blue Flags of all coastal regions in Europe. Many beaches are wind-swept. On the area near Tarifa winds blow almost permanent. So Cadiz province caters people for different kinds of active rest, such as kitesurfing, windsurfing and sailing. Also Cadiz is an ideal place for bird watchers.

Cadiz province is also well known for its cultural events. One of them is The Carnival of Cadiz that lasts two weeks. The carnival is famous for music and lyrics of satirical groups called chirigotas. Another important celebration is Feria de Jerez. A verve of this fair can be compared only to Holy Week that is the greatest occasion of Andalusia. Feria de Jerez is celebrated in May in Parque Gonzalez Hontoria (Jerez). On the fair all events are public, so everyone can walk into and enjoy the drinks, food and dancing.

So you should exactly visit the province of Cadiz if you prefer wild shoreline or if you are found of windsurfing and bird watching then.