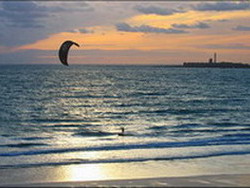 Cadiz, the capital of the same named province Andalusian autonomous community, is situated in the South of Spain and washed by the Atlantic Ocean and the Mediterranean Sea. Cadiz was founded by Phoenicians more than 3000 years ago and got the name Gadir at first. Thanks to its location it was very rich city. Many trade routs began or ended here. One of the oldest cities in Europe went by the name of “The Small Silver Cup” due to its silver mines. Even anchors and barrels for water could be made from silver here! Cadiz was conquered by Romans, and by Moorish after them. At last it was won back by Spaniards in 1262. The city had huge harbor, and exactly from Cadiz Christopher Columbus started his Second Voyage.

You should visit Cadiz if you’re found of arts and architecture. You’ll find a lot of cathedrals, monuments and landmarks that have been cleaned and restored: Plaza de Mina (the most beautiful of the Cadiz palaces), Plaza San Antonio, Fortress of Candelaria, the Plaza de la Catedral houses (both the Cathedral and the baroque Santiago Church) and many others.

Many great occasions of Andalusia are celebrated in Cadiz in a big way: Semana Snata (Holy Week), the Day of Saint Huan, and the Day of Adoration of the Magi. You can take part in amazing fancy-dress carnivals or enjoy open air concerts on the city squares.

The citizens of Cadiz say: “Welcome to the city with the longest coast in the world”.

Photo is published under the public license: Mossaig