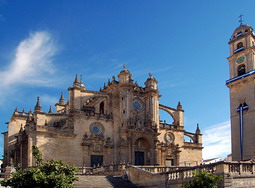 Jerez de la Frontera is belonged to the Andalusian province of Cadiz and situated 20 kilometers to the South-East from Sanlucar. Jerez city has world fame thanks to its sherry and brandy manufacturing. Jerez is also well known with its showy horses and flamenco music and dancing.

The city of Jerez was founded in Moorish times. It was small independent emirate at first. In nowadays Jerez is a beautiful Spanish city, which has astounding old town, casco antiguo. One of the most popular tourist’s attractions in the city is the Alcazar of Jerez. Partly restored Moorish fortress dates back to 11th century. Except the Alcazar you should pay attention to the Cathedral of Jerez de la Frontera, and the Cathedral del Salvador. You will be pleased to walk on the wide streets and palm lined squares of Jeres.

The largest in the province of Cadiz sherry production is a proud of Jerez’ citizens. The most of the sherry manufacturing houses are located in the center of the town. The atmosphere around this location of Jerez is aristocratic and slightly snobbish till nowadays. Guided tourist tours to the most famous wine cellars, such as Pedro Domecq, Sandeman and Gonzalez Byass, are very popular with Jerez visitors. The excursions are usually accompanied with wine-testing.

A small city in the province of Cadiz, Jerez de la Frontera, is by far Andalusian center of flamenco. Exactly in Jerez the Andalusian Flamenco Foundation is situated. Here you can visit the museum of flamenco and get acquainted with a history of this fiery Spanish dance. You can even take some lessons of dancing. Moreover, one of the most significant in the world flamenco events, The Flamenco festival of Jerez, takes place in the town from 24th of February to 11th of March.


Photo is published under the public license: Willtron.