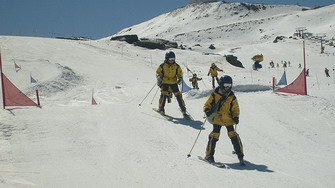 The Regional Cross-Country Ski Championships occur on the 31 of January either at the Skiing Station in Sierra Nevada or at the Nordic Ski Station in Puerto de la Ragua. Both locations are in Granada (the province of Andalusia).

According to the words of Miguel Angel Torres, the head of Cross-Country Ski and Ski/Target Shooting Biathlon training and events in Andalusia, anyone can participate in the competition. There will be several levels. It is planed that about 30-40 highly qualified skiers will take part in the competition. One of them is Victoria Padial who has satisfied the requirements to participate in the Winter Olimpics in Vancoover Canada in 2010.

The main place for the cross-country ski competition is Puerto de la Ragua near Guadix, Andalusian city on the left bank of the river Guadix. It is located at the height of 2 kilometers above sea level. Therefore, the snow there can be in bad shape. That’s why a regional training center in Sierra Nevada is chosen as alternate place for the activity.

Spectators can come and watch free of charge. In addition, they can bring their skis and follow the competitors during the event. All important information will be able on a web page of the ski federation.


Photo is published under the public license: jmerelo.