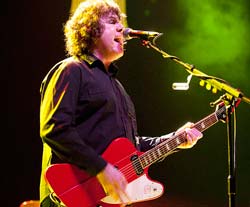 Yesterday morning, on February 6, 2011, in Andalusia on the coast of the Costa del Sol at the age of 58 years passed away the legendary Irish singer and rock guitarist, blues-rock star Gary Moore. The musician was found dead in the room of the luxury hotel Kempinski Resort Hotel in the resort town of Estepona, where he arrived for a week holiday.

Presumably Gary Moore died in the result of a heart attack. There are rumors that this could happen from excessive use of alcohol and cocaine overdose. However the exact cause of death will be established after autopsy in Malaga. Also after the autopsy will be decided the need to start criminal proceedings in spite of the death of a musician.

Gary Moore was born in Belfast in 1952. His musical career began in the late 60's. He was only 16 years old. He played in the famous blues-rock groups Skid Row and Thin Lizzy and also made a decent solo career.

Gary Moore was considered to be the most brilliant rock guitarist of the last few decades. He played in different genres: blues, hard rock, blues-rock, jazz-rock, pop, metal, experimented with electronic and dance music. In 1997 he released the album «Dark Days in Paradise», where he acted as a vocalist, and having pushed the guitar into the background caused great indignation of the fans.

Gary Moore worked with such renowned musicians as George Harrison, Albert Collins, BB King, Jeff Beck, Jack Bruce, Ozzy Osbourne, etc. During his career has recorded over thirty albums. In October 2010 he made a concert tour of eight cities in Russia ending it at the State Kremlin Palace. One of the most popular and beloved songs of a talented musician became «Still got the blues».