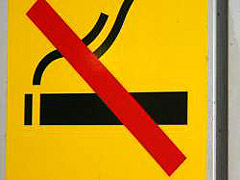 New problems are waiting for smokers after introduction of restrictive measures on smoking in public places. Currently, the administration of Malaga is preparing to launch a campaign to persuade smokers ... no to noise.

Since the introduction of ban on smoking in public places in Spain, many bars and restaurants were forced to send their customers to smoke outside. So, the nonsmoking visitors of cafe could feel safe. But then residents of the houses, where bars are located, started to experience problems. It turned out that while smoking on the street restaurant and bar visitors in Malaga make a lot of noise, which in turn do not allow the residents to relax.

To reduce the noise city authorities have decided to advertise in Malaga a new way of pastime for smokers. Campaign on reducing noise pollution came with the slogan "if you smoke, do it quietly". Thus, the authorities intend to draw smokers’ attention to the problems of those people who cannot sleep because of high noise level.

The campaign against smoking noise is promoted mainly in bars. Near the pubs entrances in Malaga authorities will place special posters persuading for civic consciousness and do not disturb others talking too loud.

It is worth noting that authorities offer the bars owners to publish and place posters in Malaga by themselves. So, in order to prevent excessive background noise the owners will be required to download and print posters from the site of the city council of Malaga. In addition, the city government plans to distribute about 1,000 posters among the business community of the city.

The Spanish edition Diario Sur notes that since the introduction of the smoking ban in restaurants and bars in Spain, in Malaga, in particular, was registered a great increase in the number of police calls with complaints of excessive noise.

If you smoke do it quietly. How completely insulting to smokers! The smoking ban legislation is disproportionate anyway and adult smokers should be accommodated in separate rooms with ventilation, not kicked outside onto the street and treated like second class citizens, Abolish this unfair law, staff and non smoking customers need not be exposed to ets and smokers can be treated fairly and accommodated inside.