New tourist tax will be introduced in Catalonia 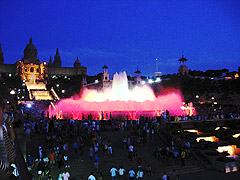 Hotel tax in the largest city of Catalonia - Barcelona - will differ from other cities of the region
Crisis in Spain forces local authorities to find new ways of budget funding. Tourist demand in Catalonia allows following the beaten path and local authorities decided to improve the region’s financial situation at the expense of tourists.

From now on for staying in Catalonian hotels its guests will additionally pay new differentiated tax for each day. New tax will affect not only staying in hotels, but also health services. Anyone, who wants to get a recipe, will have to pay additional one euro.

The new prescription tax is planned to be introduced in Catalonia on 1 July 2012. As for the hotel tax, Catalonian authorities decided to introduce after the upcoming summer season on November 1, 2012.

Today Catalonia is among the most visited regions of Spain, followed by the eternal rival Andalusia. So, summer 2011 was one of the most successful tourist seasons in the Catalonian history. From June to August the region was visited by over 5.2 million tourists. For hotels in Barcelona July 2011 was marked by the record percentage of occupancy in the entire history - 92%.

I think the writer means "prescription" tax. Recipes are instructions for making food.