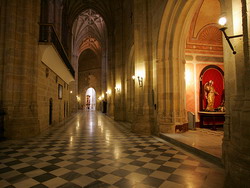 The Cathedral of Almeria

Almeria was founded in 955 by Abd ar-Rahman III of Cordoba. It was a main harbor in his huge domain. Almerian Moorish castle Alcazaba is the second largest in Andalusia after the Alhambra. Almeria endured many sieges and changed many owners. Finally, it surrendered to National Spanish forces led by General Francisco Franco in the end of the Spanish Civil War. In nowadays, Almeria is the capital of the province of Almeria that enters into the composition of Andalusian autonomous region.

The climate in Almeria is mild and hot. Annual average temperature in winter is 18°C. The quantity of sunny days is the biggest in Spain. Due to strong winds that blow quite often, Almeria is ideal for windsurfing.

Except the Alcazaba, you can visit the Cathedral of Almeria that was built in 16th century. It combines several styles: gothic, classical and baroque. Not far from the city there is natural reserve Cabo de Gata-Nijar Natural Park. One of the largest parks in Western Europe covers 460 km² including the city of Carboneras, the mountain range Sierra de Cabo de Gata, and big area of the Mediterranean Sea.

In Almeria lots of sport, cultural and religious events occur. You can take part in spectacular celebrating of Feria, Spanish traditional occasion, in the second part of August. Almeria is very popular with tourists thanks to its wonderful weather, warm sea and sandy beaches. So if you are dreaming of relaxing on the coast of the Mediterranean Sea than you should visit Almeria!


Photo is published under the public license: Dominique Sanchez.