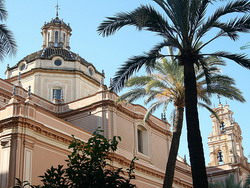 Huelva, that is located between the rivers Odiel and Tinto on the coast of the Atlantic Ocean, has always been important harbor since Phoenicans founded it. The city is the capital of Huelva province that is belonged to the autonomous region of Andalusia. As the city had several owners, it has many evidences of its rich history. Visit the Museo de Huelva to see interesting archeological collection. The mineral wealth, especially cooper exploited in 19th century, made Huelva mostly industrial city and big trade center. Many grand-scale buildings reared up between the end of 19th and the beginning of 20th centuries, like the Gran Teatro, the Casa Colon and the Clinica Sanz de Frutos. The grand-scale neo-Moorish train station (the Estación de Sevilla) also rose in this period.

Exactly in Huelva Christopher Columbus recruited and set up his trip to America. There is monument (the Monumento a Colon) erected in his honor. In the city there is quite unusual quarter, it has the name of Queen Victoria and built in expressive English style. The center of Huelva is quite compact so you can reach to its sights on foot. You should walk through the Plaza de las Monjas, the palm-lined square, close to huge shopping area.

Photo is published under the public license: Carlos M Gonzalez.