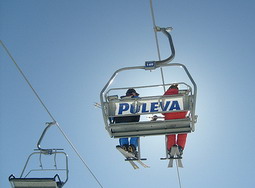 A rope of the chair lift ruptured in Sierra Nevada, an Andalusian ski resort. At the moment of the accident, there were 23 people in six chairs. Fortunately, nobody of this people died. The chairs, which could care four people each, had been at the height of 6-8 meters, although the falling of the vacationers was softened by snow.

Some sources of information assert that seventeen people got injures of low weight mostly, such us cuts and bruises. Twelve people were hospitalized. Unfortunately, two of them had been badly injured and were evacuated by helicopter to hospital in the city of Granada when the weather became calmer. Other ten injured got medical aid in Pradolano, the nearest to Sierra Nevada resort village.

All the injured are adults. They were students of a ski school course headed with Francisco Gonzalez, a local ski instructor. In the morning of March 2, when the accident happened, the weather was windy and it was snow. Therefore, the rescue operation was hampered.

The Andalusian ski resort, Sierra Nevada, is belonged in the province of Granada, South of Spain. The only ski resort in Spain is very popular with tourist from all over the world. Sierra Nevada is situated at 32 kilometers’ distance from the city of Granada.


Photo is published under the public license: jmerelo.