Fuengirola will "brush" the beaches 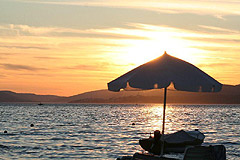 Beaches of Fuengirola will be reequipped

Beaches of the Fuengirola resort, one of the most popular places of summer holidays in Spain in Costa Del Sol, will be reconstructed to meet universal norms. The city administration of Fuengirola has decided to reconstruct all beaches of the resort according to the unified standard.

In order to improve beach infrastructure Fuengirola city officials plan to spend 4.4 million euros. These funds will be used to replace all sun beds, umbrellas, showers, as well as roads and signs.

Fuengirola is one of the largest resorts in Costa del Sol. Its beach line stretches along the Mediterranean Sea for 8 kilometers. To date, the resort is extremely popular among tourists from Britain, Ireland, Sweden and Finland. Fuengirola is conveniently located just 20 minutes from the largest airport in Andalusia - Malaga airport. Famous beaches of Fuengirola: Torreblanca, Los Boliches and others. The central beach of the resort is Las Gaviotas.

It is worth noting that beaches in Fuengirola today are considered to be the busiest in Costa Del Sol. Quality of sand on the beaches is confirmed by numerous competitions that are held every summer in Fuengirola. So, during current summer season, from 2 to 6 June 2011, the resort will host the final of the European Beach Handball tournament.

It is worth noting that tourism infrastructure in Fuengirola is not ideal. In particular, cyclists believe that the city needs new bike tracks. In order to attract attention of the authorities to this problem, on April 10 cyclists will hold a meeting near the Las Lagunas beach.