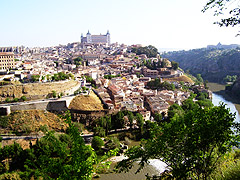 Junta tourism industry, which conducted a study about tourist expenditures in Andalusia, published data on tourist spendings in other provinces. After Jaen the most expensive province is Seville. In Seville the average daily expenditure per tourist is 82 Euros. In Cadiz - 74 Euros, in Granada - 69 Euros.

Three most popular attractions in Jaen are the city of Cazorla located 830 meters above sea level on the slopes of the top of Sierra de Cazorla, famous for its Yedra Castle, the river Segura and the National Park of Las Villas, where begins the largest river in Spain Guadalquivir. Here in the park of Las Villas at the source of the Guadalquivir is located the Bridge of Heroes - Puente de las Herrerias, built in honor of reconquering Granada by the Spaniards during the wars against the Moors.

The province of Jaen is located in the north of Andalusia. Located in the province the city of Jaen is famous as one of the legendary places in Spain, a city of historical fame, which main attractions are the Saint Catalina Castle. In 2011 in Jaen was launched super modern tram - the best way to explore the city with. In addition to the capital, the province of Jaen is also known worldwide for the city of Linares, the place where are held the world's largest chess competitions.

The province of Jaen in Spain is the largest producer of olive oil. It produces about 60% of Spanish olive oil.