Sights of Spain: the Alhambra will be equipped with a lift? 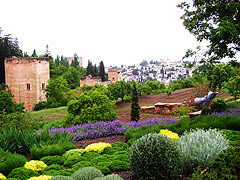 A massive plan on improving tourism infrastructure was developed in Granada. The city authorities in the person of the mayor of Granada José Torres Hurtado offered an unusual project, which should facilitate the tourists to travel easily to the main attractions.

Innovative solutions include creation between the historical Old Town of Granada the network of tunnels and elevators that will connect it with the most famous architectural monument of Granada - the Alhambra palace complex.

Project authors hope that the new system will attract a part of the multimillion tourist army, which annually visits the Alhambra. Currently only 20% of the tourists, who come to the Alhambra, book excursions to the old town of Granada.

It should be noted that this project is not the first attempt to link the historical center of Granada and one of the most striking architectural monuments of Spain. In 1999 it was planned to connect the city center and the palace complex by cable car. However, this project wasn’t adopted.

Anyway, the project on creating a new system of tunnels and elevators from Granada to Alhambra is still developed. The possibility of building such system in the near future will be studied by several technician teams. Their task will be to study the density of the soil for the tunnel construction.

At the same time in Granada started debates on reasonability of the grand building. So, the director of the Alhambra preservation Mar Villafranca believes that modern technologies on the territory of the early medieval monument will destruct its unique cultural environment, thanks to which Alhambra was included into the UNESCO World Heritage Site List.

Alhambra is a palace and park complex, one of the most striking monuments of the Islamic culture in Spain. Alhambra is considered to be the supreme achievement of Moorish art in Western Europe. The palace complex is located in the eastern part of Granada, on a hill near Albaisin and the whole ensemble is included into the UNESCO World Heritage Site List.

Why mess with such a beautiful, historical site. I understand the desire to modernize and give better accessibility, but tearing into this monument could prove destructive. Were tunnels are being built, there always is the possibility of cave-in and/or sink hole. Sorry to be devil's advocate but its something to consider.