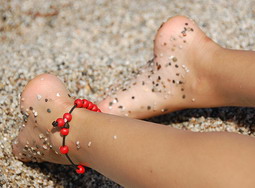 A resort city Roquetas de Mar is a municipality of Almeria province. The city is situated on the West coast of the bay Golfo de Almeria in the South of the region of Andalusia. You can reach Roquetas de Mar from the capital of Almeria province quite fast. It will take only 20 minuets. The resort city is very popular with Spanish tourists, although you can meet many UK’s, German and Irish people here.

Roquetas de Mar, one of the main resort in the province of Almeria, is famous for its wide and long beaches with white sand and a plenty of seashells. It is belonged to a resort area called Costa Almeria. The beaches of Roquestas de Mar has playgrounds with various slides, short ladders and swings. A health-resort zone of the city spreads along the coastline. The vast majority of hotels, apartments, villas and cottages are concentrated here. In contrast to such resorts in the South of the region of Andalusia as Costa del Sol or Costa Tropical, Roquestas de Mar is less crowded and spoilt.

Due to the location of Roquestas de Mar on the shore of Almeria province, the city becomes more and more popular with tourists. Besides the city of Almeria, you should visit one of the most exciting cities in the region of Andalusia, Granada, which has astonishing architecture. The journey will take 2 hours. There are all that you need for excellent rest in Roquestas de Mar: a plenty of boutiques and shops, cinemas, discos, a modern concert hall, an arena for corrida and even aqua park "Parque Acuatico Mario Park". So, spending your vacation in Roquestas de Mar, one of the best resorts in the South of the region of Andalusia, you’ll exactly not be bored.


Photo is published under the public license: Vibragiel.