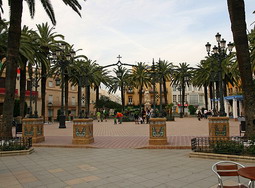 Ayamonte is a small Andalusian village that is belonged to the province of Huelva. However, Ayamonte has big importance for Spain because of its location in the mouth of the Guadiana River, which is the boarder between Portugal and Spain. Several years ago the port in Ayamonte was one of the busiest in the region. The mouth of Guadiana River was an entrance form from the Atlantic Ocean to the inland of Spain. However, in nowadays there is a very small chance to meet a huge carrier in Ayamonte. Only fishing boats cold be found here.

Ayamonte is situated in Costa de la Luz, Spanish resort area belonged to the province of Huelva. This small Andalusian village, which has the population about 19 000 people, has changed its appearance in quite short time thanks to rapid development of travel industry. Many modern hotels, cottages, restaurants and cafes have appeared in Ayamonte in few last years. They are stretched mostly along Isla Canela, the coast of the Andalusian village. Sandy beaches of Ayamonte are still much less crowded than beaches of Costa del Sol. The village is very popular with windsurfers, kite surfers and other people who adore active sports.

Ayamonte has a medieval center, where you can have a pedestrian walk along the narrow streets or taste delicious seafood. The center is closed for cars. The village of Ayamonte is also very popular with nature lovers, especially with lovers of bird watching. There are lots of protected areas in the province of Huelva situated around this Andalusian village. The salt marshes of Guadiana mouth are home for a plenty of birds of divers kinds, such as storks, flamingos and herons.

Photo is published under the public license: BK59.