Seville, the capital of Andalusia, gets Metro 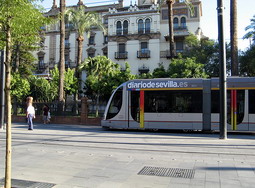 The Line 1 of the subway was officially opened in Seville on 2 April . This line includes 22 stations and stretches for 18 kilometers. It is the first metro constructed in the autonomous region of Andalusia and the sixth in Spain after the subways in Madrid, Barcelona, Bilbao, Valencia and Palma de Majorca. The ceremony of inauguration was held with participation of Manuel Chaves, the president of Andalusia, in Teatro Lope de Vega in Seville.

The construction of Seville’s metro began in the end of 1970’s, although it was stopped in 1983 because of a threat of damage of historical buildings. By the way, the section of the subway that was built between Nervion and La Plata in that period is included in the Line 1 of metro. In the end of 1990’s, design efforts were recommenced and the construction of metro started in 2003.

The opening of Seville’s metro was planned to be in 2007. However, it has been put off for several times till this Thursday. The main reason of such big delay is a short-term planning and implied unexpected problems.

Seville is the capital of the same named province and Andalusia. Its population is about 700,000. Seville’s metro will have at list 17 low-floor trains at first. It is expected to carry up to 15 million passengers during the first year of metro exploitation. The stations have platform screen doors. One of the main features of the underground stations’ design is daylight.

You can get acquainted with a plan of Sevville’s metro and a map of Seville with marked metro stations by clicking here:
Plan of metro
Map of Seville city


Photo is published under the public license: BernieCB.