The largest in Andalusia aquarium is to become even bigger 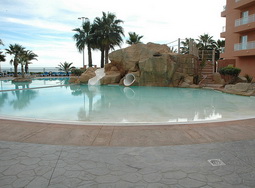 The Roquetas de Mar aquarium, which is the biggest one in the autonomous region of Andalusia, is under improvement work. The main part of the upgrade is finished: nine new tanks were installed. They are assigned chiefly for new species of fresh and salt water fish.

The opening of the extended aquarium is planned to be in June, in the beginning of a new tourist season. Since nowadays, one excursion has usually taken one hour. However, the administration of the Roquetas de Mar aquarium plans to increase time of viewing the exhibits by 20 minutes.

Roquetas de Mar is a coastal city located in the South of Andalusia and belonged to a resort area Costa Almeria. The nearest to Roquetas de Mar international airport is situated 20 kilometers to the Northeast in the city of Almeria.

Photo is published under the public license: Fran Villena (villano).