The Kiteboard Official World Championship Tour is to start in Tarifa, Andalusia 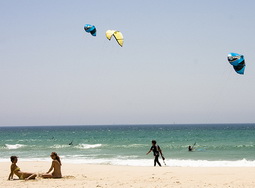 Tarifa, the southernmost city in Andalusia, is hosting the Kiteboard Pro World Tour form 1st to 5th July 2009. The championship is organized by ISAF/IKA. It is held in the city of Tarifa for the first time.

Registration to The Kiteboard Pro World Tour is taking place in Ensenada De Valdevaqueros and it is assigned on 30th June. Lots of professional riders from all over the world are expected to take part. The winners of the championship will take a prize of 5,000 euro and will be awarded with 405 points in the World Ranking.

The championship will take place on the shore of the Atlantic Ocean. Besides competitions of kitesurfers, lots of different activities, such as parties and concerts are planned to be held on the beaches of Tarifa during the Kiteboard World Cup 2009.

Tarifa is situated in the South of Costa de la Luz, a resort area in Andalusia. Due to constantly blowing winds, Tarifa is by far the European capital of kitsurfing, sailing and windsurfing. In spite of strong winds, waters of the Atlantic Ocean and the Mediterranean Sea are quite calm, that makes Tarifa an ideal place for kitsurfing and other kinds of water sports.

Photo is published under the public license: ardenswayoflife.