Flamenco Congress will be held in Seville 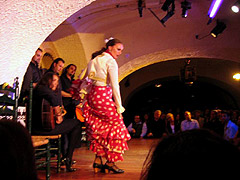 The first ever International Flamenco Congress will be held in Seville on November 10-12 2011. The main organizer of the congress is the Andalusian Flamenco Institute - the world's largest educational institution, which specializes in history and traditions of the famous Spanish dance.
The main goal of the International Flamenco Congress is a dialogue between supporters and lovers of flamenco throughout the world, exchanging experience in organization of various activities, promotion of flamenco beyond such traditional regions as Spain and some Latin American countries.

The congress will be held at the convent of Santa Clara in Seville. The program of the Congress includes three specialized seminars, industry meetings and round tables.

At the congress will be also discussed such issues as flamenco cultural studies, the value of dancing for the cultural heritage and actor experience.

One of the key themes of the congress will be promotion of flamenco to the international markets: creation of video and audio materials and their distribution.

Anyone can take part in the congress. Subscription to the Congress costs 100 Euros. This amount includes breakfast and lunch, handouts at lectures and seminars.

Today Seville is not only the capital of Andalusia, but also the world center of flamenco. In addition to the Institute of Flamenco here is also located a unique Museum of Flamenco, which creation was inspired by the famous Spanish flamenco dancer Cristina Hoyos. In 2010 flamenco along with the Mediterranean diet was included in the UNESCO list of intangible assets of the World Cultural Heritage.

Classical flamenco is a fusion of three components: instrumental music, singing and dancing. Currently in the world there are about 50 varieties of flamenco. The most popular styles tona, solea, fandango and seguiriya are believed to originate from the Indian musical culture.