300 huge anchors were stolen from the port near Chiclana de la Frontera, Andalusia 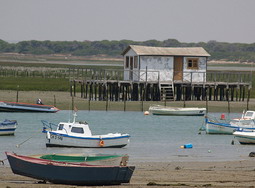 300 big metal anchors, each is more then 2 meters and weighing up to 340 kilos, disappeared from the port of Novo Sancti Petri, which is belonged to the Andalusian province of Cadiz, about a month ago. But only today the news of such an unusual theft became approachable for society.

The police of Chiclana de la Frontera ascertained that each anchor costs more then 1000 euro, so the value of the theft is thought to be much more then 300,000 euro. The anchors were brought to the port of Novo Sancti Petri in June 2005 and were stored near the entrance. The reasonable question appears, how could the anchors been stolen without any noise? Because at least 5 huge lorries would have been needed to take away such a heavy load.

The type of anchors, which were stolen, has been used by fishermen for more than three thousand years. The way of fishing tuna almost has not been changed since the Phoenicans times.

Chiclana de la Frontera is an old Andalusian town situated 35 kilometers south from Cadiz, the capital of the same named province, and six kilometers from the shore. Chiclana is belonged to the resort area Costa de la Luz. Sancti Petri is a fishing village in the North of the Playa de la Barrosa. The village has marina and the port.