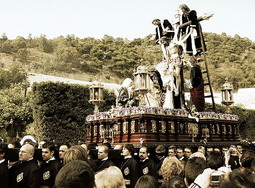 The officials of Andalusia assert that quantity of hotel reservations for Semana Santa (Holy Week) is about to achieve the level of last year.

According to the words of Francisco Moro, the Vice President of the Costa del Sol Hoteliers Association, the rush is mainly caused by the excellent weather forecast without any rain during Semana Santa and by general landslide of prices. Some hotel’s owners offer their rooms with 30 per cent discount in comparison with the prices in the same time last year.

There are two places in Andalusia where Semana Santa is celebrated in a great way: the cities of Malaga and Seville. They have attracted thousands of tourists every year, and it’s evident that 2009 won’t be exception in spite of the financial crisis. Francisco de la Torre, the Mayor of Malaga city, said that more than 15 thousand visitors were expected to come on 9 cruise liners that would dock during the week before Easter. About 1600 flights are awaited at Malaga airport. It should be mentioned that two new hotels, Husa Guadalmedina and Vincci, have been opened since last Semana Santa in Malaga.

The celebration of Semana Santa in Seville and Malaga is famous for its large scale. Up to 60 colorful processions go through the streets caring huge decorated floats every year during the week before Easter.


Photo is published under the public license: bachmont.