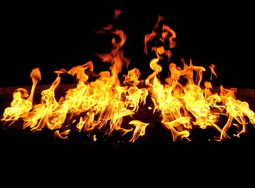 Every year at midnight of 23 June, citizens and guests of Andalusia celebrate a spectacular feast, the Night of Saint John (La noche de San Juan). There are two places where the Feast is celebrated in the biggest way: the village of Lanjaron located in Granada province and the capital of Costa del Sol, Malaga city.

The Feast of Saint John the Baptist takes place at the shortest night of the year. At this night, hundreds of bonfires are scattered along the shoreline of Malaga. It seems that Spaniards do this far to short night shorter thus.

Participating in the Feast of San Juan, visitors of Andalusia have a great opportunity to feel an unique atmosphere of traditional Spanish holiday. The best place for the celebrating is undoubtedly one of the perfect beaches of Malaga city. It is considered that swimming at the Night of Saint John possesses a magic effect – it helps to preserve eternal beauty. There are several other traditional actions, such as jumping over bonfire’s flame and burning of big hand-made dolls that often have caricatural faces of famous people.

About 150 kilometers to the East of Malaga there is another place where La noche de San Juan is celebrated in a quite unusual for Andalusia way. It is a small continental village Lanjaron, which is belonged to the province of Granada. Every year at the night of 23 June, Lanjaron becomes a battlefield for hundreds of people with water pistols and buckets of different kinds. This annual hilarious action is called Water and Ham Festival. During the next several days after a grand water fight people enjoy delicious ham for which the village of Lanjaron has huge fame.


Photo is published under the public license: dcwriterdawn.