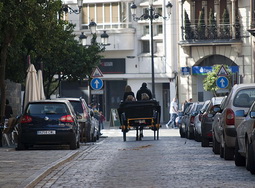 Filming of a new romantic comedy 'Knight & Day' with Cameron Diaz and Tom Cruise begins in Seville, the capital of Andalusia. The famous Hollywood starts haven’t arrived to the city yet, although some action scenes are being shot with the actor’s doubles.

According to the words of Sevelle’s council spokesman Maribel Montano the presence of the stars and the film’s team will ensure an imposing income of 7 million euro to the city’s treasury. All apartments of some local hotels are reserved by the team. More than 10000 hotel nights are booked, thanks to that this month, that is usually not very eventful, will be the best November in the history of hotels of Seville. As some areas of the city will be closed for strangers, all shops and restaurants in these areas will be paid 7.5 euros per square meter per day as a recompense.

The team of ‘Knight & Day', that includes 300 technicians and 250 auxiliary staff, is going to shoot large-scale car chase episode containing plenty of gun shots. Also more than 3000 extras are being involved in the filming that takes place around Plaza de San Francisco and Plaza Nueva. The team is going to work in Seville 16 days or a little bit more. In the middle of this period the crew will move to another Andalusian city, Cadiz, where the filming will last one week. After that all they are going to return to the city of Seville.


Photo is published under the public license: DraXus.