The Pilgrimage is to begin in El Rocio, Andalusia 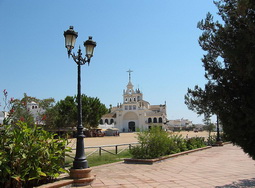 The Pilgrimage of El Rocio, one of the most important religious events in a huge area around the town, is taking place in 1 June 2009. The event has got participants to take part from the whole territory of Andalusia and even back lands of Spain and farther foreign countries. During the time of the Pilgrimage, El Rocio, a small quiet town located in Andalusian province of Huelva, is visited by million of palmers annually around the weekend preceding Pentecost Monday.

A tradition of celebration the Pilgrimage of El Rocio dates back to the 15th century. According to a legend, a hunter from the neighboring village of Villamanrique had paid attention to unusual shapes of a tree in Donana Park (also called Coto de Doñana). Looking closely he discovered a statue of Virgin Mary in a trunk of this tree. Since that time, the Virgin of El Rocio has become more and more popular with pilgrims. In nowadays, about one hundred of religious brotherhoods of Andalusia (hermandades) visit El Rocio in the end of May or in the beginning of June every year to pay homage to the Virgin Mary. The streets of the town become full of people dressed in traditional Andalusian clothes: men wear hats with brims and country garb; women are in traditional flamenco dresses. The participants usually arrive by decorated carts or on horseback. Some pilgrims from further Spanish regions have a journey that lasts 5 days.

The town of El Rocio (El Rocío) is situated in the West of Andalusia 66 kilometers from the city of Huelva and 147 kilometers from Seville. There are two another places in Andalusia where the Pilgrimage is also taken place around the weekend before Pentecost Monday: the town of Huescar in Granada province and the town of Villanueva de Cordova in Cordoba province.


Photo is published under the public license: : Jose Antonio Pardo.